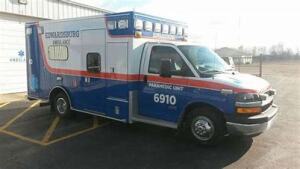 He was born on July 3, 1969 in South Bend, Indiana to Mathew and Margaret J. (Tennison) Panozzo, Sr.  He was graduated from Niles High School and continued his education at Southwestern Michigan College in the registered nurse program.  He was licensed in Michigan as a Paramedic and had served most recently on the Edwardsburg Ambulance, previously serving at Sister Lakes Ambulance, and Cass County Ambulance.  In addition to his paramedic work, he volunteered as a firefighter with the Pokagon Volunteer Fire Department.

Matt was a great cook, celebrating his family’s Italian heritage with ravioli.  He used that same heritage as a reason for his gregarious personality, greeting all friends loudly and with a genuine interest in their lives.  He was also always willing to share his thoughts and opinions.  During quieter moments, he enjoyed the outdoors, had a special interest in watching the night sky constellations, planets, and satellites, and was always interested and knowledgeable about the activities of NASA.

Matt was formerly married to Amanda Shemick.  He was preceded in death by his mother, Margaret Panozzo on September 20, 2018.

The family of Mathew Panozzo, Jr. will remember him in the same manner in which they remember his mother.  Online condolences may be left at:

Matt clearly loved people, enjoyed his relationships, was fascinated by nature, and left us too soon, wishing for that next enthusiastic greeting.

To send flowers to the family or plant a tree in memory of Mathew Panozzo, Jr., please visit our floral store.

You can still show your support by sending flowers directly to the family, or by planting a memorial tree in the memory of Mathew Panozzo, Jr.
Share a memory
© 2020 Halbritter Wickens Funeral Services. All Rights Reserved. Funeral Home website by CFS & TA | Privacy Policy | Terms of Use