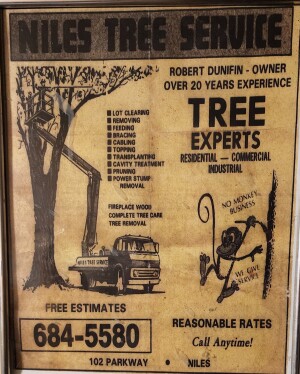 Robert Leroy Dunifin, Sr., age 93 years of Niles, Michigan, father grandfather, great- and great-great-grandfather, arborist, hunter, and outdoorsman died at 12:11 a.m. on Wednesday, June 22, 2022 at his home, having fought all the way to the end against an extended illness that would keep him indoors.  His family is grateful for the kind and compassionate care provided by the staff of Caring Circle Hospice at Home.

He was born on April 1, 1929 in Berrien Springs, Michigan to Floyd and Inza (Weaver) Dunifin and had attended Berrien Springs schools.  He began his career by working in area manufacturing plants including National-Standard, Clark Equipment, and French Paper, but always had some “side” jobs after work.  Eventually his skill in tree service met his dislike for being inside a factory, and he established the Niles Tree Service as his full-time day job.  As his equipment and skills continued to improve, he added another side job of painting antenna towers.  He never really retired, was always a hard worker, and even in his nineties – in a power wheelchair – he was quite capable with a shovel and concrete rake when his driveway was replaced.

Bob enjoyed hunting throughout the area for deer and squirrel, and even when his children were young, they knew that pleasant drives in the country were for studying deer movements to determine the next best place for a tree stand.  He also had a habit of stopping at every lake to “test the waters” with a few minutes of casting a fishing line.  The few evenings indoors still included watching wildlife shows such as Mutual of Omaha’s Wild Kingdom.  When he was younger, he enjoyed country and western shows, and Johnny Cash performances, and Bob was even known to play the guitar.  He also watched televised wrestling and boxing “back when it was real”, and was a regular when pool halls were popular in Niles, and like everything else, he was quite proficient with a pool cue.

On October 3, 1948 he married the former Betty Jean Gowland with whom he celebrated the remarkable Fiftieth Anniversary of their wedding prior to her death on July 14, 1999.  He was also sadly preceded in death by two sons, Robert Dunifin, Jr. and Jody Dunifin, a daughter, Beverly Lewis; by Bob’s parents, and by his siblings including a three-year-old brother, Harold who died in a fire, another brother, Donald Dunifin who died while serving in the United States Army during World War II; and by Dorothy, Betty, Bernetta, Edward, and Doris.

The life of Robert Dunifin, Sr. is worthy of a special time and place to gather, share memories, and honor his life, but his family needs some help from his friends in order to do so.  Contributions may be made through this website at https://www.halbritterwickens.com/payments.  They also hope to be able to gather at Silverbrook Cemetery to reunite his remains with Betty Jean’s.  Online condolences may be left at:

Ninety-three years is a lot of life, more than many complete, but Robert never slowed-down, always combing his hair just right, and rolling-up the cuffs of the empty legs of his blue jeans to make the daily trip to the grocery store for deli chicken, and visiting with friends all along the route.  Sometimes he was content just sitting in the shade in the neighborhood church parking lot, as long as he was outside.  But more important than all of this was the constant and faithful love of his family gathered around him.

To send flowers to the family or plant a tree in memory of Robert Dunifin, Sr., please visit our floral store.

A Memorial Tree was planted for Robert

Join in honoring their life - plant a memorial tree

Celebration of Life will be held at a later date.