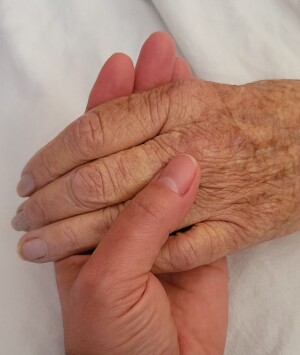 She was born on October 4, 1946 in Niles to Wyatt E. and Gladys I. (Bauman) Martin, and was graduated from Niles High School.  In 1984 she began a career at the former Clark Credit Corporation in Buchanan, Michigan, moving with them to Dallas, Texas in 1995, and retiring in 2009 as a Vice-President at Clark’s successor, Clark/Citi/GE Finance.  She returned from Carrollton, Texas to Niles where she has lived most of her life.

She enjoyed live music, attending area jazz concerts including Smooth Jazz at Sunset in the Shadowland Pavilion at Silver Beach, and was a great fan of the Chippewa Project band, never missing their performance at the annual Chippewapalooza in Buchanan (Terry is clearly present on Chippewapalooza’s Facebook cover photograph).

At home, Terry enjoyed keeping her lawn and flowerbeds looking wonderful, walking throughout the neighborhood to visit friends, and caring for her pet dog, Lucy.  But her greatest joy was her family, especially her grandchildren.

The family of Terry Flint will host a – very casual – gathering of relatives and friends from 1:00 p.m. until 4:00 p.m. on Saturday, May 8, 2021 at the Chippewapalooza Grounds, 928 Chippewa Street in Buchanan.  Masking and social distancing appropriate for outside gatherings will be practiced.  Cremation has been completed, and the cremated remains will be interred privately, at a later date at Mission Hills.

Contributions in memory of Terry may be made to the Buchanan Scarecrow Charities, 324 East Dewey Street, Suite 108, Buchanan, Michigan, 49107; https://www.facebook.com/Buchanan-Scarecrow-Charities-594183673960360/.  Arrangements were made at the Halbritter-Wickens Funeral Home, 615 East Main Street in Niles.  Online condolences may be left at:

To send flowers to the family or plant a tree in memory of Terry Lee Flint, please visit our floral store.